The service provided by Consileon was professional and comprehensive with a very good understanding of our needs and constrains.

Technical quality of staff offered, capability of performing various project roles, as well as motivation and dedication to the project (... [...]

The team was always highly motivated and professional in every aspect to perform on critical needs of our startup environment.

Testing inside and outside boundaries

Traditionally we were using MVC frameworks to implement our web applications. While this pattern worked great in a past it is not a case anymore. The problem is that our applications are fairly complex nowadays. We expose features via the HTTP, via REST/Json API’s, we are communicating with external API’s, sometimes we have more than one storage. The problem of MVC is that it was not designed to tackle growing application complexity.

In traditional MVC approach your business logic is implemented in models. However while the application is growing models are growing as well. If you won’t tackle the growth of an application you’ll end up with 6000-lines long models with hundreds of callbacks.

Concerns that were introduced to Rails do not solve the problem. They do not deal with complexity. Instead they just move complexity aside so that we do not see it when we open a model class. But issues remains the same as without using concerns.

For applications that require tackling growing complexity, we need something more than plain old MVC.

The Hexagonal Architecture aka Ports and Adapters 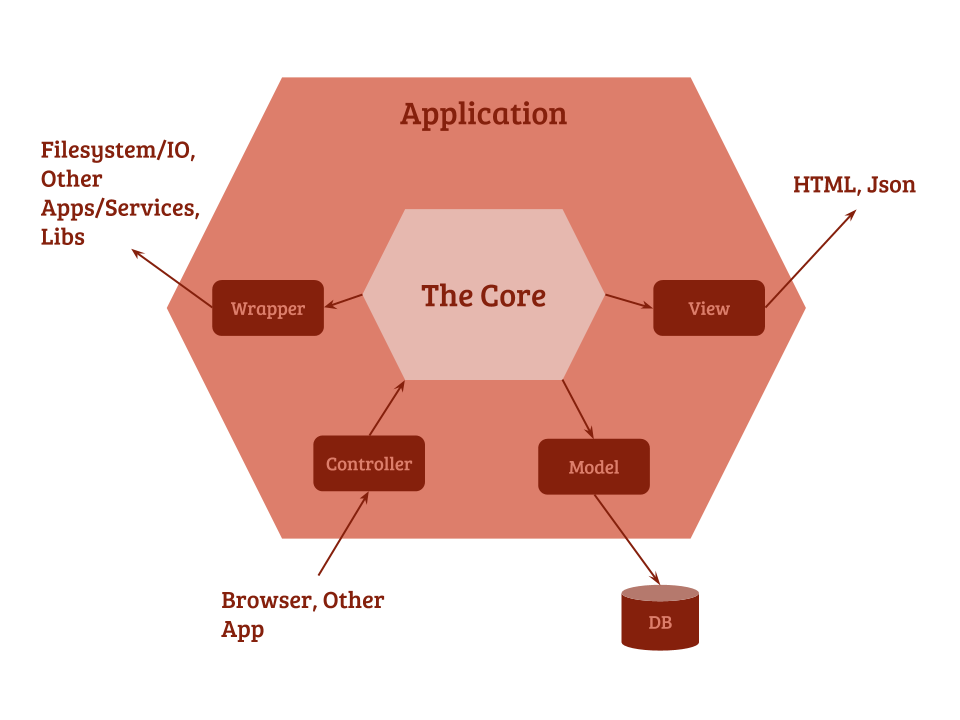 We see that we have 2 boundaries in this architecture. The core is where all domain logic lives. Outside the core, but still within application boundaries, lives all code related to the framework (Rails) and everything that wraps calls to IO, file system, external services even libraries. Everything else is external to the application.

It is important to note that through each component (port) dependencies goes in a same direction. Controllers depends on the core, but core is not depending on controllers. Core depends on models, but models are not dependent on core, and so on.

As said core is all your business logic. I’ve intentionally left that as a placeholder instead of describing what components should core consist of. It is really dependent on the application specific requirements and your fluency in Object Oriented Design. You can apply Domain Driven Design principles, you can create simple service objects. Whatever works given the application domain and requirements.

Note that things like DDD were designed to tackle growing complexity. If your application is not fairly complex and level of complexity is not rising using DDD is overkill. Do a good judge picking the right tools!

Because you don’t know the exact architecture of an application core it is perfect place to drive its design by tests. You can easily replace components that do not belong to the core with test doubles and test core independently from framework.

You may ask how isolation helps testing core logic?. Isolation comes with a burden of mocks and stubs, is it worth the price? I strongly believe that isolation helps significantly (and not just because tests are running faster, that is for free!).

Firstly if you are isolated from framework you deal only with complexity of a problem that you are solving (we call that essential complexity). You don’t need to deal with additional complexity inherited from the framework (that’s accidental complexity). Well at least other than framework/s used for testing.

Secondly mocks and stubs gives you greater control over the different circumstances that may happen. It is especially helpful if you want to test different scenarios including connection timeouts, etc. It is much easier to tell a mock to throw an exception instead of trying to simulate similar behavior on a real object. Sometimes you don’t even have access to test or sandbox environments.

It is quite safe to use mocks and stubs when testing core. Everything that surrounds core belongs to the application, so you are mocking only components that you own. That is very important.

Those are two great benefits of testing in isolation. And I believe they are worth the price.

All that belongs to the application but is not a core I classify as a boundary. Those components are much different than core components therefore they should be designed and tested differently.

There is no point in driving design of boundaries from tests. The design is already enforced by the framework, API’s, libraries (even standard). There is not much benefit that you can get from test driving that part of an application.

Also the complexity of those components is not changing. The wrapper for an HTTP client will remain the same no matter which library you will use under the hood (whether it be Faraday, RestClient, or Net::HTTP). If the complexity is not growing and is predictable you will gain no benefit in tackling it.

There is no point in testing boundaries in isolation. Boundaries are thin components that delegates messages either outside the application or into a core. They unwrap data from structures and wrap to another structures. Not much of a logic to test here. We won’t limit accidental complexity by isolating boundaries. In fact it will amplify its impact as mocking components that you don’t own leads to a very fragile tests. Also frameworks are designed to provide nice DSL’s or API’s which are not grateful when mocking (like ActiveRecord call chains).

Despite if you will test boundaries in isolation you will need to test it also in integration/acceptance/system tests. You must ensure that not only boundary components are doing what they should, but they are integrating well with outside world and a core. Integration tests will cover everything that you might test in isolation (given the fact that boundaries are simple classes without much logic inside). There is no point in testing same piece of functionality twice.

Also you can be less restrictive when testing boundaries. While testing core you will check each possible condition that you can imagine and simulate, when testing boundaries you don’t need to remove every possible mandatory parameter from a request to ensure that it will respond with bad request each time. You don’t need to test functionality that is provided by framework. You just need to ensure that it integrates correctly.

When dealing with application that is fairly complex and you predict that the complexity will grow you need something more than plain old MVC. Wrap your core logic and surround it with a shell of components isolating it from outside world. Let those isolating components be logic-less, simple delegators that transforms data structures. Test drive your core design and test it in isolation, you will deal only with essential complexity and will have greater control over different scenarios and conditions. Do not test drive code that does not belong to the core. Its design is driven by frameworks, libraries or protocols and it is not a complexity that you want to deal with. Make your ports simple so that their complexity is at low, stable and predictable level.

Full stack web developer, software and solution architect, project manager, agile enthusiast and professional with enterprise background that loves getting things done. Productivity, constant improvement, highest possible quality are his attitudes. Currently he is working with Ruby on Rails stack and JavaScript but his background includes enterprise development in Java/J2EE, mobile development for Android platform and embedded development in C/C++ for telecom.He is an avid follower of SOLID principles, that loves simple design. Nothing makes him more happy than simple interfaces, small methods and clean code. His toolkit includes UNIX/Linux systems, VIM and of course Git.